Home » Are you reliably excitable?

Studies on motor impairments sometimes involve electrophysiological measures to assess the effects of therapeutic interventions.  For example, to determine the effect of an exercise program on brain function/excitability, a researcher might measure muscle responses elicited by non-invasive, magnetic stimulation of the brain (transcranial magnetic stimulation). When researchers plan their studies and interpret their results, it is important for them to know how reliable these electrophysiological measures are. In a recent article, Brown et al. (2017) assessed the reliability of over a dozen electrophysiological measures. The researchers collected the measures on three separate occasions over a 2-year period. The study involved four research institutes and between 84 and 112 healthy participants. 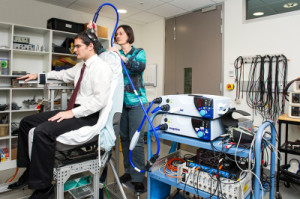 Transcranial magnetic stimulation of the brain.

With the results from this study, researchers can now better interpret results from studies that use these electrophysiological measures. Furthermore, researchers can now better plan their studies. They can consider the reliability of their measures when determining the appropriate number of participants to recruit. In their paper, Brown et al. (2017) provided two examples to help readers appreciate the importance of a measure’s reliability on planning a study.

Example 1: Resting motor thresholds are obtained using transcranial magnetic stimulation. This measure had a moderate-to-high level of reliability (its intra-class correlation was 0.73). Based on this value, a simple study of 40 participants looking for a moderate-sized effect would have a statistical power of ~80%. This level of statistical power is considered good and indicates that if a true effect was present, the study would have an 80% chance of detecting it.

Example 2: Somatosensory evoked potentials are obtained by electrically stimulating a peripheral nerve and recording the resulting brain activity in the somatosensory cortex. This measure had poor reliability, with an intra-class correlation of only 0.32. The same simple study of 40 participants for a moderate-sized effect would now have a statistical power of ~36%. Wow! That means that if the intervention truly had an effect, we would only have a 36% chance of detecting it with this electrophysiological measure. It would take 100 participants to achieve 74% power.

In summary, Brown et al. (2017) have given researchers the ability to better estimate the required number of healthy participants for a study focused on electrophysiological measures. The next step is to obtain similar measures in various patient populations to ensure studies on these individuals are also adequately planned.

Martin Héroux is a Senior Research Officer at Neuroscience Research Australia (NeuRA). He is part of the team that works on the NHMRC Motor Impairment Program Grant, and he has authored several blogs related to motor impairment. In his spare time, Martin also co-authors a blog entitled scientificallysound.org which focuses on reproducible research in the digital age.