Home » Motor units in the human calf muscle: not as complicated as you think

Have you ever been in a team environment where some people do the majority of the work while others site back, do nothing, yet still like to take the credit? My co-authors and I certainly have! In a recent study we noted that not all muscles of the human calf muscle contribute to standing upright (Heroux et al., 2014). We found that the lateral gastrocnemius muscle was the lazy one. All the work was being done by the soleus muscle and the medial gastrocnemius muscle. While this was a great example of synergistic muscles not contributing evenly to a task, there is also evidence that a similar behaviour occurs within a single muscle. Studies that have recorded muscle activity on the skin surface have noted the presence of regional activation of the medial gastrocnemius muscle (Vieira et al. 2010). This type of regionalized activation can only occur if motoneurons associated with the medial gastrocnemius muscle innervated muscle fibres located in small sub-regions of the muscle (see Figure 1). In fact, recordings of muscle activity from the skin surface have shown that the longitudinal territory of muscle fibres from human medial gastrocnemius motor units was on average 2.5 cm (Vieira et al. 2011). 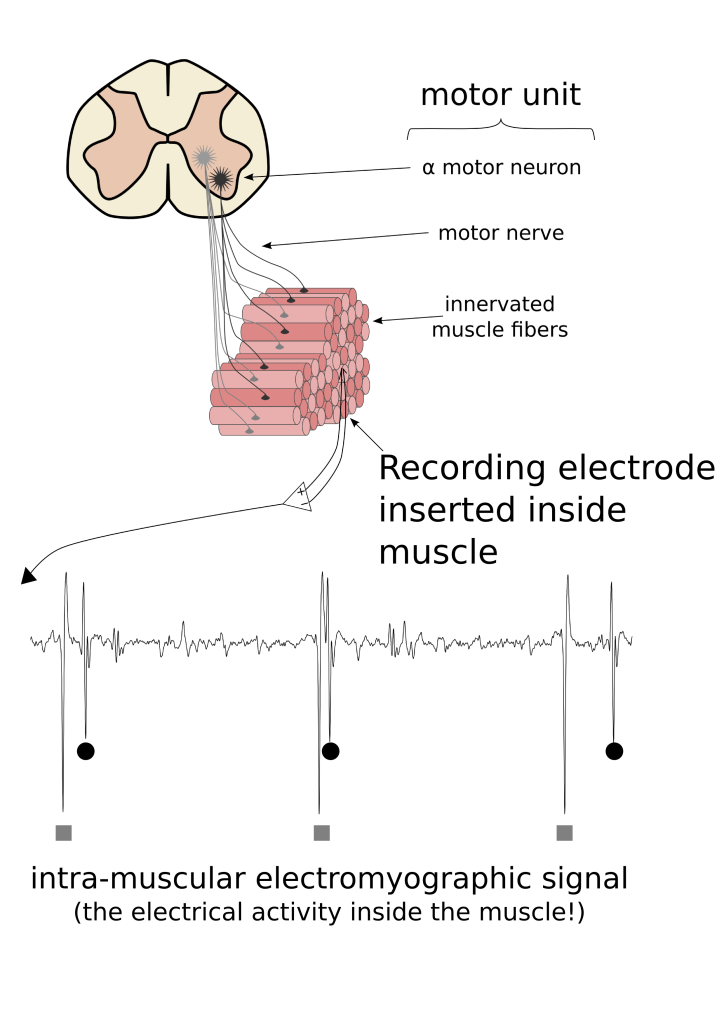 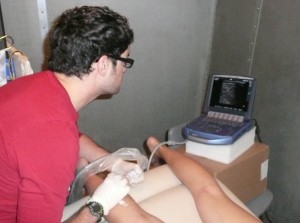 However, based on our previous study that used fine-wire electrodes inserted in the human medial gastrocnemius muscle, we had a hunch that things were not so clear…so we decided to investigate!

As subjects performed isometric plantar flexion contractions (the action you use to push on the gas pedal in a car), we recorded motor unit activity using several fine-wire electrodes placed from top-to-bottom or side-to-side inside the medial gastrocnemius muscle. We also had 3 micro-electrodes that were inserted in the middle of the muscle and at either extremity. Using a technique call spike-triggered averaging, we were able to determine where in the medial gastrocnemius the muscle fibers from recorded motor units were located (see Figure 2).

Figure 2. On the left we see the (scary) experimental set-up with the 3 micro-electrodes and 7 fine-wire electrodes inserted along the length of the medial gastrocnemius muscle. By recording the activity at various locations along the length of the muscle, and then using the discharge times of a target motor unit (Middle panel: small black circles on the top trace)to trigger the activity of the other recordings, spike-triggered averages could be computed. In this example, the target motor unit likely had muscle fibres along the full length of the medial gastrocnemius.

In contrast to what was reported using less direct measures taken from the skin surface, we found that motor units in the human medial gastrocnemius could span the entire length (14-18 cm) or width (~8-11 cm) of the muscle. While there were some motor units that had their muscle fibres confined to a small region, more than half the motor units that we investigated spanned at more than 50% of the length or width of the muscle (Figure 3). There was no relationship between the size of the motor unit distribution and the force at which the motor unit was recorded, or the type of contraction (plantar flexion versus knee flexion) was being attempted.

Figure 3. Visual depiction of motor unit territories. Circles indicate target motor unit was recorded from micro-electrode at Site 1, 4, 7 (left panel) or Site A, C, E (right panel). Vertical and horizontal lines indicate the territory of each recorded motor unit based on spike-triggered averages. Note that many motor units span the full length or width of the muscle.

Results from this study indicate that the central nervous system does not have the means to selectively activate regions of the medial gastrocnemius muscle based on task requirements. This may indicate that the neural circuitry that controls these muscles is simpler than previously thought. It also means that I can stop looking at everyone walking in front of me for evidence of regional muscle activity!

Vieira TMM, Windhorst U, Merletti R (2010). Is the stabilization of quiet upright stance in humans driven by synchronized modulations of the activity of medial and lateral gastrocnemius muscles? J Appl Physiol 108, 85–97.