Skip to content
Home » Muscle: a novel way to study its structure

Diffusion tensor magnetic resonance imaging (DT-MRI) is a novel technique used to study muscle architecture, and is currently being used for NeuRA’s motor impairment research. In his review paper, Damon et al. [1] comprehensively describes the details of the technique. In this blog, we cover some key elements to this technology which we will likely hear more of in the near future.

Skeletal muscle has a hierarchical structure, consisting of bundles of fibrils, fibres and fascicles. Changes that occur at any level of this hierarchy can result in changes to the overall function of the muscle. The measurement of such parameters is important not only to serve as inputs for biomechanical muscle models, but also to identify structural changes that may occur in muscle with disease.

DT-MRI is used to study muscle architecture on the tissue-organ scale. While the technology was initially developed to examine neural connectivity of the brain, over the last decade it has been increasingly applied to study skeletal muscle. Traditional means to measure muscle architecture include ultrasound imaging as well as direct anatomical inspection. However, these techniques have limitations. Direct anatomical inspection is limited by cadaver availability, health and age of these subjects, and artefacts produced by fixing the cadeveric tissues. The major problem with ultrasound is that it provides 2D images, while the complex 3D architecture of most human muscles requires 3D methods. DT-MRI resolves most of these problems, because it provides 3D, in vivo, high-resolution fascicle reconstructions. 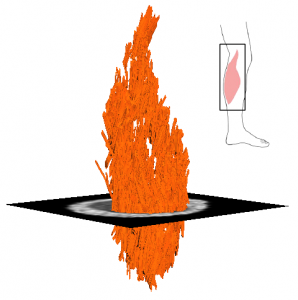 Diffusion tensor imaging is an MRI method based on the diffusion properties of water molecules. In the absence of boundaries, water molecules diffuse equally in all directions. The introduction of boundaries, such as protein filaments and cell membranes, change the principal direction of water diffusion: the molecules primarily diffuse parallel to the boundary, as opposed to perpendicular to it. In an MRI scanner, the direction and extent of water diffusion can be measured within each voxel of the imaged muscle. These measurements provide a wealth of information about the local orientation of muscle fibres, and about the microstructural properties of the tissue.

Fiber tracking algorithms are often applied to map the fibre trajectories between the origin and insertion of the muscle. Starting from a  seed point located in the muscle, a curve is generated that follows the direction of the muscle fibres. Tract propagation continues until a predefined stopping criterion is met. This includes, but is not limited to, anatomical boundaries (such as muscle borders), maximal angle change of the principal direction of diffusion per propagation step, and maximum fascicle length. From the reconstructed fascicles, it is possible to infer architectural parameters such as pennation angle, fascicle length and curvature.

DT-MRI fibre tracking techniques have been used to study several muscle groups in humans including the plantarflexor, gastrocnemius, soleus and tibialis anterior of the lower leg, the quadriceps of the thigh as well as the forearm muscles (the complete list with references can be found at [1]). Clinically oriented studies examine age associated changes in muscle architecture [2] as well as the effects of chronic lateral patella dislocation [3]. Similar principles could be applied to investigate muscle myopathy, and DT-MRI could provide a better understanding of the structural adaptations that occur in muscle conditions such as contracture. We expect to report more soon about our studies on muscle structure and function using this advanced new technique.