How do we learn things? Sometimes learning occurs over many trials but other times it occurs after single episodes. The traditional view of learning has invoked Hebbian plasticity (Hebb 1949). Here, the concept is that “neurones that wire together, fire together”. Enhanced firing of a post-synaptic cell is thought to occur when a pre-synaptic input is closely paired to post-synaptic firing. The time intervals here are thought to be only in the tens of milliseconds. However, in a recent paper in Science titled, “Behavioral time scale synaptic plasticity underlies CA1 place fields,” Bittner and colleagues revealed a novel mechanism that may underlie behaviourally-relevant learning over much longer time scales. 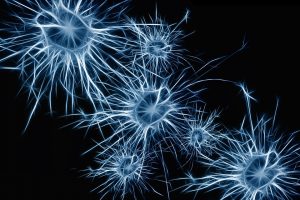 To reveal this new form of plasticity, termed “behavioural time scale synaptic plasticity,” they studied the behaviour of cells in the hippocampus in mice which were running on a treadmill. The hippocampus is a brain region in the medial temporal lobe involved in memory, learning and navigation (Andersen 2007). Bittner and colleagues examined the formation of new “place” cells which were formed during novel running. Intracellular recordings showed the long temporal build-up of plateau potentials due to persistent inward currents. For each new place cell these potentials built up and decayed over several seconds. Their properties were consistent, not with Hebbian conditioning, but with a form of plasticity with a longer time course that was behaviourally relevant. Even single trials could induce changes in the post-synaptic cell. Additional pharmacological studies revealed the involvement of L-type calcium channels and also NMDA receptors. Modelling studies suggested timing signals input from another hippocampal region could induce this behavioural time scale synaptic plasticity.

The findings by Bittner and colleagues are exciting because they have the potential to alter our understanding of how motor memories and navigational learning arise. It is interesting to speculate how widely the discovered mechanism could apply to cortical cells and even spinal motoneurones, as plateau potentials have long been thought to contribute to sustained firing of spinal motoneurones (Heckman et al. 2008). Ultimately, the findings may shed light on disorders and diseases which affect sensory, motor, and related memory systems.

Hebb DO. The Organisation of Behavior. Wiley, 1949.

Simon Gandevia is an NHMRC Senior Principal Research Fellow and Deputy Director of Neuroscience Research Australia (NeuRA). His research investigates the sensorimotor control of human movements. He has special interests in proprioception, muscle, breathing control, and fatigue.  He is Chief investigator of the NHMRC Program grant at NeuRA on Motor Impairment. You can learn more about Simon and his research here. You can also follow him on Twitter @SimonGandevia and @MotorImpairment.