Much can be learned from case studies of individual patients. This has been shown more than once in the field of stroke research.  The observations by the illustrious neuroanatomist Dr. Brodal of his own stroke are an example (Brodal 1973).

A paper recently published in the Journal of Neurophysiology provides another example. It features a case of delayed partial recovery from weakness and paralysis produced by a devastating stroke, with improvements in hand function more than two decades after the initial event (Sörös et al. 2017).

In 1979, when the patient was 15 years old, his cervical rib compressed his subclavian artery, such that thrombosis formed back to the innominate artery. Emboli subsequently entered the carotid and vertebrobasilar circulations. A dense left hemiplegia developed with a large right frontoparietal infarction.

No detail of any initial rehabilitation is given but partial use of the left shoulder and elbow, along with the left leg had been regained about 4 months after the stroke. However, minimal recovery occurred in the left hand: it was spastic and useless for 23 years.

Functional MR imaging was performed when the second period of recovery had occurred. When the patient repeatedly opened and closed his left hand there was extensive activation in both hemispheres and bilaterally in the cerebellum. In contrast, movements of comparable size and rate made by the unaffected hand (i.e., the right hand) produced only focal activity in the contralateral sensorimotor cortex, supplementary motor area and cerebellum. 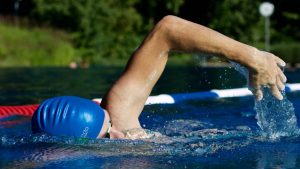 While the case features a rare complication of the thoracic outlet syndrome produced by a cervical rib, it highlights spectacularly the capacity of cortical and cerebellar circuits to be reformed or reactivated in such a way that new functional movements can occur at the distal extremity, i.e. the hand. It is not possible to determine whether the swimming and later rehabilitation caused or even contributed to the surprising improvement. It may have occurred spontaneously.  Nonetheless, the case has important messages for rehabilitation of stroke, especially in young people.  The traditional view in rehabilitation following stroke is that most of the functional improvement occurs within the first 12-18 months.  One widely promoted view is that the initial motor recovery occurs to a fixed proportion of the initial severity of the deficit (70% of recovery occurs in the first three months) (Prabhakaran et al. 2008; Smith et al. 2017).  This case of prolonged paralysis with delayed recovery after a severe ischaemic stroke means that the therapeutic window for improvement can be much longer than traditionally thought.  By implication, many new therapies (potentially cellular, pharmacological or physical ones) could be tested long after stroke.

Simon Gandevia is an NHMRC Senior Principal Research Fellow and Deputy Director of Neuroscience Research Australia (NeuRA). His research investigates the sensorimotor control of human movements. He has special interests in proprioception, muscle, breathing control, and fatigue.  He is Chief investigator of the NHMRC Program grant at NeuRA on Motor Impairment. You can learn more about Simon and his research here. You can also follow him on Twitter @SimonGandevia and @MotorImpairment.