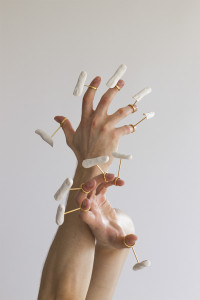 The brain cannot properly control the movement of the body without knowing something about its size.  However, the body does not have receptors to signal size directly, the brain has to work it out using information from multiple senses (e.g. touch, vision, proprioception) and then store it in body “maps” for use during movement control.  Many clinical conditions disrupt these body maps causing a motor impairment (see de Vingnemont 2010), but we know very little about how maps are created and maintained.  To understand how disruptions of body maps lead to motor impairment we must first understand how the brain generates them and keeps them up to date as the body changes size and shape.

Local anaesthesia is known to change the perception of body size.  It is a common experience that things feel bigger after the dentist or a doctor has anaesthetised them.  Local anaesthesia is also a powerful research tool because it can be used to block specific nerves and signals.  This technique allows us to simulate the loss of particular nerves in a group of otherwise healthy people.

In this paper (Walsh et al. 2015) we used local anaesthesia of the index finger to study how removal of the sensation of touch affects the brain’s internal maps of body size and shape.  We did not previously know if the changes in perceived size were uniform, that is, are anaesthetised body parts felt to get equally longer and fatter? 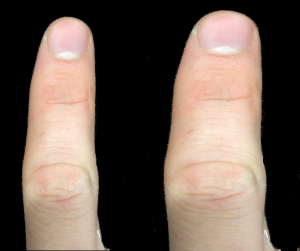 After local anaesthesia of the index finger it feels nearly a third fatter than normal, but about the same length as normal.

This study suggests that the brain processes information about body width differently to information about body length.  Width and length information may even be stored in separate maps.  It’s not yet clear why the brain should treat width and length information differently.  One possibility is that the brain assumes that damage to a nerve means that an injury has occurred and adds a constant perimeter around the body to protect it from further injury.  If something feels fatter than it is you will keep it further away from other objects than you usually would.

It turns out that a 32 % increase in finger width and a 3% increase in finger length equates to a constant perimeter around the finger (see Walsh et al, 2015, Figure 5).  So it might be that the brain is not concerned with width or length but is just applying a constant perimeter to the finger.  At this stage this is hypothesis, so more research will be needed to understand how the brain processes information about body size and how that system goes wrong to produce motor impairment.