Nerve cells that innervate the biceps muscle become more (or less) excitable depending on the posture of the arm (Mogk et al. 2014). This has been shown by stimulating the motor area of people’s brains (the motor cortex) and measuring the size of responses in the muscles when the arm rests in different shoulder and forearm postures (Mogk et al. 2014). However, with stimulation of the motor cortex, changes in muscle responses can be due to processes either within the motor cortex or in the spinal cord. Thus, it is not known whether the reported changes occur in the cortex or in the spinal cord.

In our study, we tested if the influence of arm posture on the nerve pathway between the brain and muscle involves processes in the spinal cord. The main pathway that controls movement in people is called the corticospinal pathway. It transmits signals from the brain to the motor nerve cells (motoneurones) in the spinal cord. These motoneurones then project to the muscles. We asked able-bodied participants to rest their right arms in various upper-arm (hanging, shoulder flexed, shoulder abducted) and forearm postures (pronated, neutral, supinated). To assess excitability of the nerve cells in the spinal cord, we applied electrical pulses across the base of the skull. These pulses stimulate the corticospinal nerve fibres at the level of the spinal cord and avoid direct activation of the motor cortex in the brain (Gandevia et al. 1999). We measured the size of responses evoked by this stimulation in both the biceps and triceps brachii muscles, with the arm relaxed. 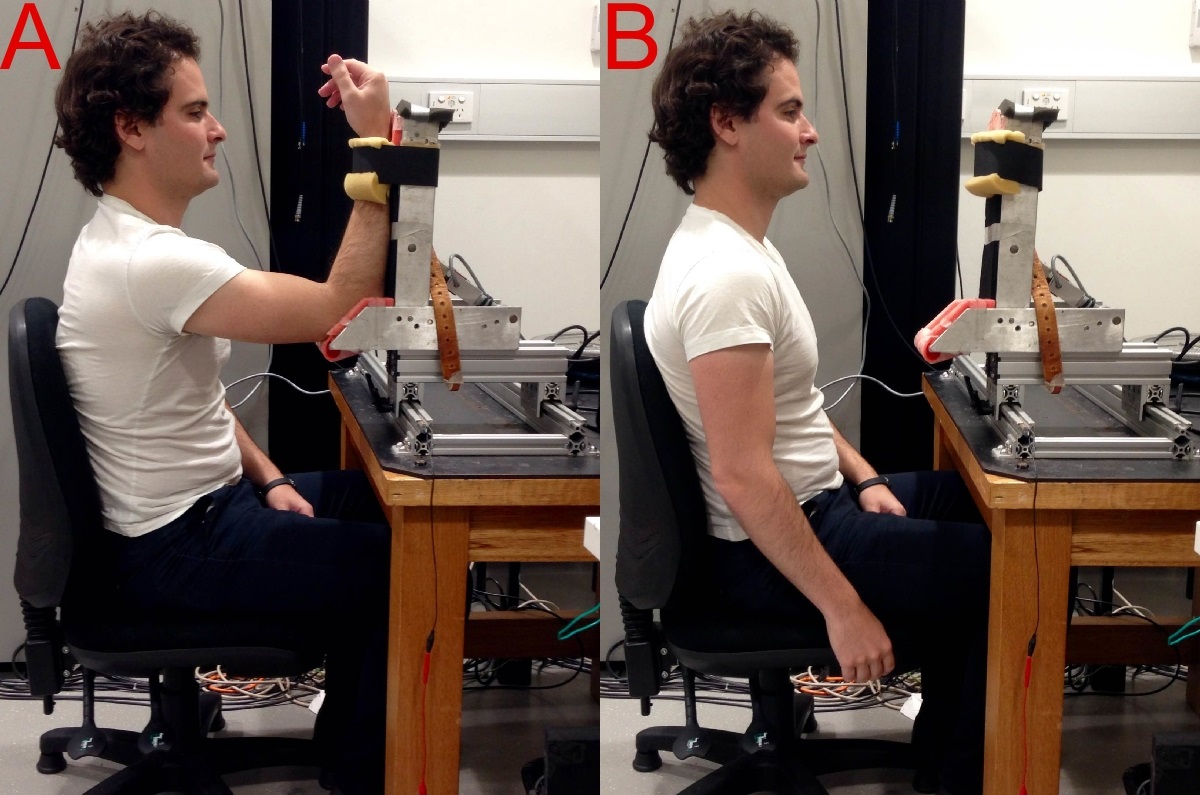 For the motoneurones in the spinal cord that convey signals to biceps, excitability was influenced by upper-arm and forearm posture. Responses were greatest when the shoulder was flexed and the forearm was supinated (palm up; Figure A) and smallest when the arm hung down by the side (Figure B) and when the forearm was pronated (palm down). For the nerve cells going to triceps, excitability was only influenced by upper-arm posture, with responses being smallest when the arm hung by the side.

The new result is identification of the spinal cord and not the brain as the primary location where arm-posture-dependent changes in corticospinal excitability take place. This finding may be relevant for rehabilitation programs because when nerve cells are more excitable it is easier to activate them. Since patients with motor impairments have impaired muscle activation and strength, it may help to have the arm in certain postures during strength training to “re-educate” specific muscles.