Home » How active are adults? Habitual durations of physical activity and sedentary behavior depend on age and gender

Regular physical activity is important for our health and well-being. Recent evidence suggests that independent of being physically active, limiting the duration of sedentary behavior, such as sitting or lying down, is important to reduce the risk for cardiovascular disease, diabetes, cancer and all-cause mortality (Biswas et al. 2015). 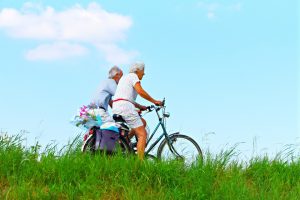 In our recent study (van Schooten et al. 2018), our aim was to provide reference data of the habitual durations of physical activity and sedentary behavior obtained through an activity monitor for people of different ages. This study was performed in the Netherlands, where we asked 762 people between the ages of 18 and 97 to wear an activity monitor for a week. The activity monitor provided objective information about the time someone spent cycling, walking, standing, sitting and lying. We compared the duration and intensities of these activities between people grouped by age and gender.

Despite the importance of physical activity, many people struggle to be sufficiently active. On average, people spend between 0.8 and 1.4 hours walking per day, accumulated in walks with a maximum duration of 2.6 to 6.2 min each. Most physical activity guidelines recommend a minimum activity duration of 10 min for aerobic activities, such as walking, to be considered to contribute to their achievement. Since wearable sensors detect short stops (e.g. stopping to cross the street), which would otherwise be unreported, updates to physical activity guidelines are required to match this increased resolution.

Dr Kim van Schooten is a Postdoctoral Fellow at NeuRA and a Conjoint Senior Lecturer at University of the New South Wales. Her research seeks to understand why balance and mobility decline with ageing and how we can counter these declines. You can learn more about Kim and her research here or follow her on twitter @KimvanSchooten.