A progressive reduction in limb muscle mass is characteristic of advancing age, usually referred to as sarcopenia (Rosenberg, 1997). This loss of muscle mass and strength is likely to contribute to the general loss of mobility and risk of falling, a major concern for the elderly. These problems have been the focus of considerable research aimed at finding the mechanisms and possible preventative measures.  Much research has concentrated on muscle protein metabolism and there is clear evidence that a combination of ageing and inactivity leads to a reduction in insulin sensitivity and reduced uptake of glucose and amino acids, especially leucine, and consequent reduction in protein synthesis.  This may account for the muscle fibre atrophy seen with ageing, but fibre atrophy makes only a relatively small contribution to the overall sarcopenia.

The motor unit (MU) consists of a single alpha motoneurone and all of the muscle fibres that are innervated by that neurone. Small muscles may have several dozen MUs, while the large limb muscles are likely to have thousands.  In the 1970s, post-mortem estimates ofmotoneurone  numbers in the lumbo-sacral region of the spinal cord showed that older people had around 30% fewer than young (Tomlinson & Irving, 1977). Electrophysiological EMG techniques were developed a few years later to derive ‘motor unit number estimates’ of individual muscles. When applied to the extensor digitorum brevis (a small muscle in the foot) in a cross-sectional study of subjects between 4 and 88 yrs, Campbell & McComas, concluded that MUs were progressively lost with age, the rate accelerating over the age of about 60 years. A refined version of this technique uses ‘spike-triggered-averaging’ in which the intramuscular EMG signals (normally collected using a concentric needle) are used to identify the respective surface-recorded individual motor unit potential (MUP) waveforms from which an average representative wave form can be estimated.  Supramaximal stimulation of the motor nerve produces a compound muscle action potential which is assumed to represent all the MU “visible” to the surface electrodes.  If, then, the size of the average MUP is divided into the size of the compound muscle action potential, this gives an estimate of the number of MUs within the recording volume of the surface electrodes (Motor Unit Number Estimate, see Piasecki et al., 2015a).  For small muscles this probably means the whole muscle, which is why most studies have concentrated on muscles of the hand or foot.

Age-dependent loss of motor units has been demonstrated in muscles of the anterior thigh, plantar flexors, dorsi flexors and extensor digitorum brevis (in the foot). These leg muscles are innervated by motor neurons that have a cell body in the lumbosacral region of the spine.

Until recently, very little was known about MU changes in the large anterior thigh muscles, which provide most of the power for locomotion, and the link had not been made between MU loss and sarcopenia. This is an important gap in knowledge because the thigh muscles are particularly susceptible to age-related atrophy. To address this question, we (Piasecki et al., 2015b) adapted existing techniques to estimate the MU number and size in the vastus lateralis (VL) in 22 young (age 25 yrs) and 20 old (age 71 yrs), physically active healthy men. All participants performed a series of isometric knee extensions held at 25% of their maximum strength, during which intramuscular and surface EMG signals were collected from the proximal motor point of the VL. The MUNE values for older men turned out to be around 30% lower than values for the young men.

But, as mentioned above, the MUNE value represents the state of affairs in a volume of muscle beneath the recording electrodes which, for the VL, is only a portion of the whole muscle. To estimate the total number of MUs lost it is necessary to multiply the MUNE value by the muscle size.  MRI images show the old VL to be 30% smaller than the young.  So, with MUNE reduced to 70% and muscle size also reduced to 70%, the number of surviving MUs is reduced to around 49%.  It is a sobering thought that by the age of 70 a man (and there is no reason why women should be exempt) will have lost around half the motor units, and thus motor neurons, supplying the major muscles of the thigh.  On the positive side it was interesting to note that the surviving motor units were, on average, around 25% larger in old than young.   At least some of the denervated fibres are reinnervated by axonal branches from surviving motor neurons which helps maintain muscle mass and strength, although, possibly, at the expense of some aspects of motor control.

Motor unit remodelling during the normal ageing process includes loss of motor neurons and enlargement of the surviving motor units. The denervated muscle fibres may atrophy and die (middle image), or be reinnervated by nearby motor nerve axon branches where they adapt the same phenotypic characteristics as existing fibres in that motor unit (right image). Please note: If the picture does not upload automatically, please click the icon above.

We do not yet know the reasons why motor units are lost with ageing, nor are we aware of lifestyle or genetic factors that accelerate or protect against the losses. The larger MUs in old are likely to be due to ‘collateral reinnervation’ of denervated fibres. However, the reinnervation is not completely successful in VL and consequently, large numbers of muscle fibres are lost, as noted by Lexell et al. (1988) and this seems to be a main reason for muscle wasting. Our results indicate that the extent of MU loss exceeded that of muscle loss and may therefore precede clinically relevant symptoms of sarcopenia (although there are reasons to doubt the common definition of sarcopenia, but that is a discussion for another time).

The pioneering work of Campbell & McComas indicated a cataclysmic-like loss of MUs in the EDB in very old age, such that several subjects had only a few functioning MUs remaining. We had thought this must be some kind of technical or experimental error, but our recent work in very old and frail elderly (unpublished) has intriguingly produced similar results for the TA and the VL; indicating few motor units and those that remain are relatively small. It seems as though a threshold has been crossed, beyond which the fate of muscle fibres shifts towards loss, rather than rescue. It will be important to find ways to help older people to maintain motor unit numbers later into life, but also to examine the association between motor unit remodelling and poor control of movements in older people.  One possibility that has been put forward is that high levels of physical activity throughout life will protect against MU loss (Power et al., 2010), but this has yet to be confirmed. 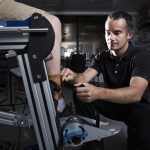 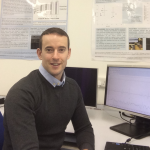 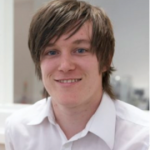 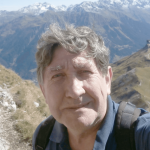 Lexell J, Taylor CC & Sjöström M. (1988). What is the cause of the ageing atrophy? Total number, size and proportion of different fiber types studied in whole vastus lateralis muscle from 15- to 83-year-old men. J Neurol Sci 84, 275-294.