Skip to content
Home » How do muscles bulge during contraction and does this influence function?

Perhaps when you were a child, you stood in front of a mirror and flexed your elbow to see how big your muscles were (perhaps you have done this recently?).  The harder you contract your muscle, the bigger it looks. But of course the muscle doesn’t actually get bigger, it just bulges about its middle.   The muscle is able to shorten, and bulge as a result, because it attaches to spring-like tendons, which stretch slightly when the force is applied. So why does the muscle bulge out when it shortens?  Muscle volume does not change with contraction.  If you consider squeezing the ends of a water balloon together, and assume that no water escapes the balloon, it will bulge in the middle.  This is what happens in our muscles, but the way a muscle bulges depends on its structure – including how muscle fibres are arranged and how they connect to the bone through elastic connective tissues.  We are interested in how the design of muscles has evolved so that the way they bulge or change shape might actually improve their performance in everyday tasks like walking, running or jumping.

We are particularly interested in how muscle bulging influences how the connective tissue within a muscle stretches and transmits force along the muscle.  Muscle fibres attach to elastic connective tissue. Some of this tissue sits within the muscle itself, forming the aponeurosis. The aponeurosis often runs along the muscle and connects to the tendon, which ultimately transfers force from the muscle to the skeleton. When the muscle fibres generate forces this acts to stretch the aponeurosis and tendon.  Stretch of these tissues absorbs energy and protects muscles from over stretching and damage.  It can also act like a catapult by using stored elastic energy to propel the body or limbs.  While tendons are generally thought to behave like elastic bands, we know much less about how the aponeurosis stretches.  It has been suggested that it may stretch both along the length of the muscle as well as laterally during a contraction. This may act to stiffen a muscle during contraction.  At present there are only a small number of studies in animals that have shown this.

HOW DO WE MEASURE MUSCLE BULGING IN HUMANS?

To understand how human muscles contract in three-dimensions, it is necessary to have a way of imaging the muscle during contraction. There are many ways to image the three-dimensional geometry of muscle, particularly using technology like magnetic resonance imaging (MRI). However, one limitation of these techniques is that they take time to make the measurement and hence it is hard to image the muscle during a contraction.  We have used ultrasound imaging, which is a safe and affordable alternative to MRI, to image muscles as they contract.  We take image slices across the length of the muscle and stack these together in 3D.  Thus, we can see how the muscle and the aponeurosis change shape during contractions which are held at different levels of force. We have recently used this to show how the tibialis anterior muscle bulges during contraction. (Tibialis anterior is the main muscle in your lower leg which lifts the foot.)

When the tibialis anterior muscle contracts, it is not surprising that it becomes wider in the middle.  However, what was interesting  was that the muscle bulged predominantly in thickness, rather than width.  The change in thickness meant that the muscle fibres were able to rotate, which limited the amount of shortening required of the fibres, hence potentially reducing the energy cost of contraction.  We also found that the aponeurosis within the muscle was stretched in both directions when the muscle contracted and produced force. This meant that the connective tissue became stiffer as force increased. 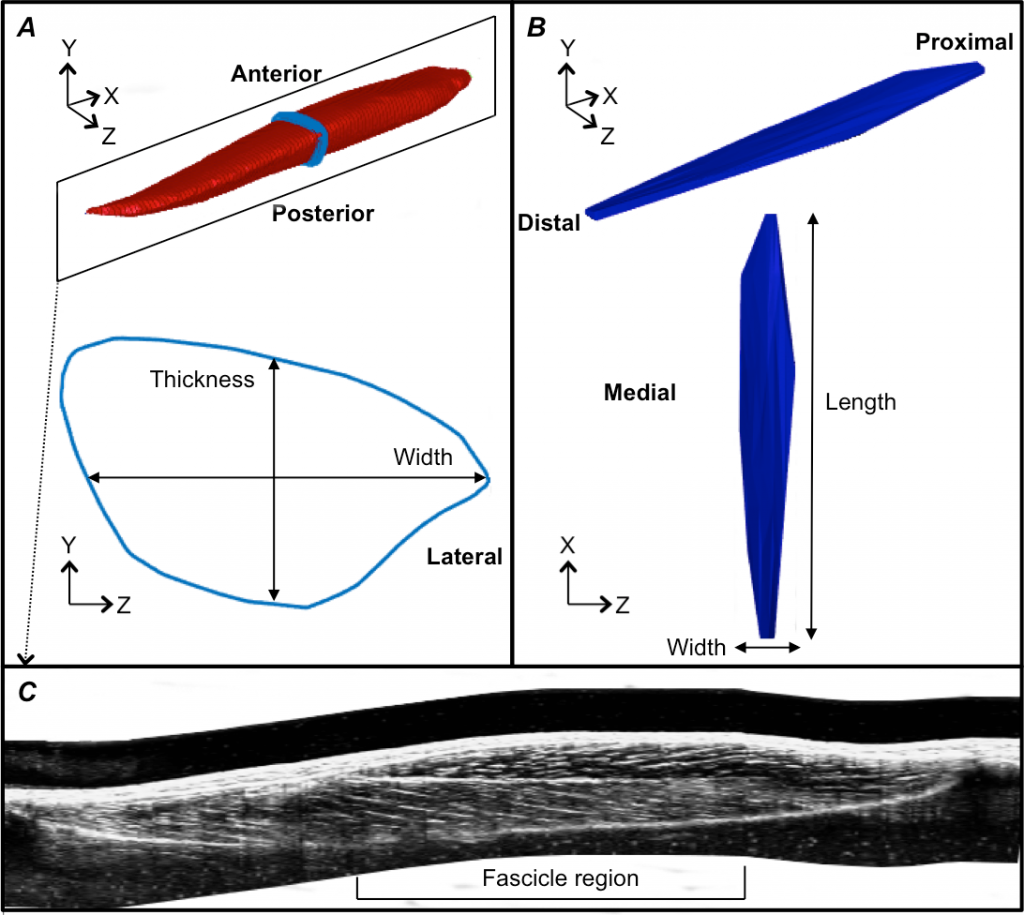 3D geometry of the tibialis anterior muscle (A) and central aponeurosis (B) and a reconstructed ultrasound image along the long axis of the muscle showing a cross-section through the muscle (C) (Raiteri, 2016).

Understanding muscle geometry changes during a contraction is important for understanding human function and performance in both healthy individuals and in clinical populations.  The way that muscles change length influences how much energy they use, and the way tissues stretch changes the likelihood of injury.  The effective stiffness of a muscle during contractions also affects how our joints are able to move. When a motor impairment has occurred because of a neurological condition (e.g. stroke or cerebral palsy), muscles may adapt to become more stiff and the geometry of the muscle may be one factor that governs this adaptation.  Therefore it is important to understand both muscle structure and its function, to be able to understand some motor impairments and to improve human performance.

FOR OTHER POSTS DEALING WITH THE MEASUREMENT OF MUSCLE PROPERTIES SEE:

Muscle: a novel way to study its structure by Arkiev D’Souza