Skip to content
Home » How do muscles change shape when they are passively lengthened?

Muscles are often referred to as ‘motors’ that drive human and animal movements. This analogy certainly captures the important role of muscles as active generators of force and movement. However, it sells the equally important passive properties of muscles short. Most of us will only appreciate the importance of passive muscle properties when these are affected by disease. For instance, people who have had a stroke or children with cerebral palsy frequently develop muscle contractures – a stiffening of muscles even when the muscle is not activated. Contractures frequently lead to loss of mobility, bone deformities and other undesirable effects that limit physical independence.

Aiming to better understand the passive mechanical properties of muscles, we have used diffusion tensor imaging (DTI), a magnetic resonance imaging (MRI) technique, to obtain the most detailed measurements to date of changes in muscle structure of a human calf muscle (medial gastrocnemius) during passive lengthening (Bolsterlee et al., 2017; note that for those interested in more details on this novel imaging technique, there is a recent review paper by Damon et al., 2017). From the DTI data we measured how several thousands of muscle fibres changed length, orientation and curvature when the whole muscle was lengthened. We also measured the change in dimensions of muscle fibres, which can be thought of as several centimeter long cylindrical tubes with diameters similar to human hairs. From anatomical MRI scans the changes in three-dimensional whole-muscle shape were derived. 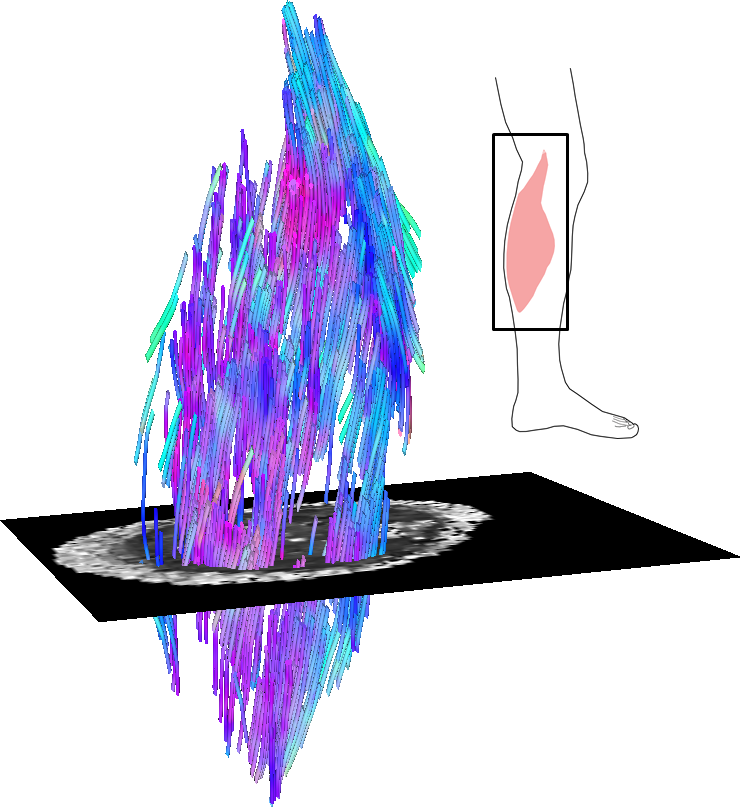 Example of a three-dimensional reconstruction of the architecture of the human medial gastrocnemius from diffusion tensor imaging (DTI) data.

We found that the medial gastrocnemius reduced both its width and its depth when the muscle lengthened. Muscle fibres rotated by about 8° and lengthened by 35% when the whole muscle changed its length by 7%. The diffusion properties of muscle tissue measured by DTI (which gives information about the microstructure of muscle cells) suggest that the diameter of muscle fibres decreases when fibres are lengthened, presumably to maintain a constant volume.

These data help us understand the complex changes in structure that human muscles undergo when they passively lengthen. We can now use these methods to study, in unprecedented detail, the differences in muscle structure between healthy people and people with muscle contractures. This may give us new insights into the mechanisms of contracture, which will ultimately enable better management or treatment of this condition.

Muscle: a novel way to study its structure. Written by Arkiev D’Souza