Exercise induced muscle fatigue is a common experience for healthy people. It involves multiple changes in the nervous system such as changes at the spinal and supraspinal level (central fatigue) and changes in the muscle itself (peripheral fatigue). During a fatiguing maximal effort, the ability of the nervous system to drive the muscle declines progressively and can contribute to more than one-quarter of the force loss (Gandevia, 2001). Despite substantial contributions of the nervous system to fatigue, the underlying mechanisms of central fatigue are not well characterised.

Previous studies have shown that the responses of motoneurones (the nerve cells that are located in the spinal cord and directly connect to muscle fibres) are profoundly reduced during a sustained maximal voluntary contraction. We aimed to determine whether this reduction in motoneurone excitability occurs because the intrinsic behaviour of the motoneurones may be altered by repetitive activity. We used supramaximal stimulation of peripheral nerve to activate all the motoneurones antidromically and measured any recurrent motoneurone discharge. These recurrent responses are known as F-waves when measured in the EMG (see figure). Although there are some limitations of the F-waves as outlined by Burke (2016), it remains a useful technique to assess changes in motoneurone excitability. 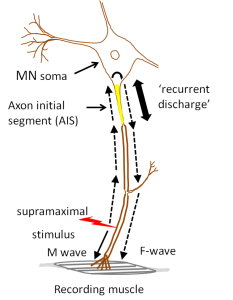 Our goal in the recent work has been to test the link between repetitive activity of motoneurones and depression of F-waves in voluntary and stimulated contractions.

First we found that depression of F-waves was present in an intrinsic hand muscle (abductor digit minimi ADM) after a 10-s maximal effort using the muscle but not after a submaximal voluntary contraction at 50% maximum.  Hence, the depression likely grades with the amount of voluntary activity.

Second, we found that activation of the ADM motoneurones antidromically by supramaximal stimulation of the ulnar nerve at 20 or 40 Hz did not depress F-waves.  Hence, electrical activity alone in the motoneurones may not be a requirement for depression of F waves.

By contrast, there were no changes in the more remote first dorsal interosseous muscle on the radial side of the hand.

Our findings suggest that depression of F-waves after voluntary contractions is not simply due to activity-dependent changes in the active motoneurones. We speculate that there is a mechanism directly related to descending voluntary activity which changes the excitability of the motoneurones independent of their repetitive firing per se.  One type of mechanism could involve release of neuromodulators by descending motor pathways acting on motoneurones.

Burke D (2014). Inability of F waves to control for changes in the excitability of the motoneurone pool in motor control studies. Clin Neurophysiol  125, 221-222.