Mental fatigue is a psychobiological state induced by sustained periods of demanding cognitive activity. Mental fatigue can negatively impact many aspects of daily life, such as workplace and physical exercise performance. Mental fatigue can manifest itself subjectively, behaviorally and physiologically. The subjective dimension includes increased feelings of tiredness and lack of energy as well as decreased motivation and altered mood. Behaviorally, mental fatigue can result in a decline in performance during cognitive tasks, e.g. decreased accuracy and increased reaction time. Physiologically, mental fatigue is associated with altered brain activity and adjustments within the autonomic nervous system (Boksem et al. 2008; Van Cutsem et al. 2017). There is growing evidence that impaired cognitive functioning is associated with poor gait performance in older people, resulting in an increased risk of falling (Grobe et al. 2017). However, despite mental fatigue being a potential contributor to cognitive impairments, its acute effect on gait performance has not been investigated. 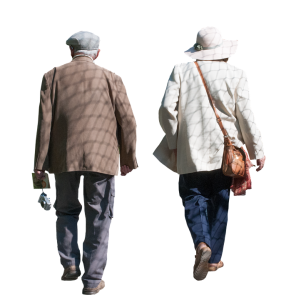 After the 90-minute fatigue intervention, both young and old participants reported increased fatigue and arousal as well as decreased mood and wakefulness. However, the fatigue intervention impaired dual-task gait performance only in the old adults. The coefficient of variation of speed, stride length, and stance time were all increased during dual-task walking in old adults but not young adults.

The results from our study show that mental fatigue can impair gait performance during dual-task walking in old adults. An underlying cause of this result may be age-related structural alterations of the brain. For example, prefrontal areas have been identified as a contributor to decreased gait performance under dual-task conditions in older people (Yogev-Seligmann et al. 2008).

Our results indicate that older adults’ susceptibility to mental fatigue might be a new intrinsic risk factor for falls, as previous studies have shown that dual-task gait performance is predictive for falls in the elderly. Thus, mental fatigue should be measured, and its potential influence on gait parameters considered, when dual-task gait analyses are performed in the laboratory or clinic. Other experiments will be needed to determine the effect of mental fatigue on dual-task gait performance in patients, particularly those with neurologic diseases that have high prevalence and severity of fatigue symptoms.

Martin Behrens is a Postdoctoral Fellow at the Institute of Sport Science, University of Rostock. His current research interests are in the mechanisms of fatigue and their role in human performance in health and disease. You can learn more about Martin and his research on ResearchGate and Twitter.