Last night, you missed dinner and you’ve woken up early because your body is ready for a feed. You stumble from your

bedroom into the kitchen. You open the fridge and search for your favourite jar of jam. It’s nowhere to be found. Your partner finished it (without telling you, of course), and there are no other jams in the fridge. You grab a new jar from the pantry and attempt to open it. The lid does not budge. You try a second time. Again, the lid does not move. You try three more times, but you don’t have any success.

“I opened a jar like this just the other night,” you say to yourself. “Why can’t I open this one?”

You knock the lid against the edge of the countertop three times – perhaps to wake your partner on purpose. Then, with all of your might, you try to twist the lid from jar.

“Ah, forget it!” you exclaim, peering down at the (still) unopened jar. “I’ll eat a cold slice of pizza instead!”

Your inability to open the jar may have been due, in part, to morning muscle weakness – the reduction in maximal strength that occurs in the early morning after awaking from a night’s sleep. In healthy individuals, muscle strength is lowest around 6AM and then peaks in the late afternoon and early evening, usually around 5PM (see Figure 1). This time-of-day effect has been documented in the muscles of the legs, back, and arms, including the muscles that make it possible to open jars of jam. On average, muscle strength is 5 – 10% lower in the early morning than in the afternoon or early evening (e.g., Coldwells et al. 2004; Edwards et al. 2013; Guette et al. 2005; Martin et al. 1999). Interestingly, the fluctuations in muscle strength throughout the day coincide with changes in body temperature (e.g., Edwards et al. 2013). 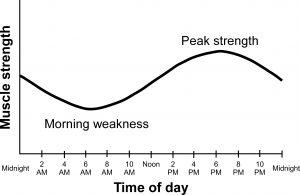 Figure 1. This figure illustrates the sinusoidal relationship observed between muscle strength and time of day. In general, muscle strength is lowest in the morning then gradually increases (or plateaus) throughout the afternoon and early evening, and then decreases thereafter. The magnitude of difference between the lowest and highest parts of the curve is roughly 5 – 10%. This figure has been adapted from Coldwells et al. 2004.

WHAT CAUSES MUSCLE WEAKNESS IN THE MORNING?

Muscles are innervated by nerves that originate in the brain and spinal cord. One possible explanation for muscle weakness in the morning is that nerves are not maximally “driving” muscles at this time of day. A way to test this neural drive is to superimpose a strong electrical pulse to an individual’s nerves while they perform a test of muscle strength. If the electrical pulse creates additional force from the muscle, it means the individual’s nervous system was not driving the muscle at maximally capacity. This seems like a plausible explanation for muscle weakness in the morning, because during certain periods of sleep, limb muscles are paralysed by the nervous system (“motor atonia”). However, studies that have assessed neural drive to muscles in the morning and evening have reported no effect of time of day (Guette et al. 2005; Martin et al. 1999).

A second possibility is that the muscle’s contractile characteristics change throughout the day. These characteristics are independent of the nervous system, and a way to examine them is to deliver an electrical pulse (or series of pulses) to the muscle while it is at rest. When this has been done, researchers have found that muscle twitch characteristics are different in the morning than evening (Guette et al. 2005; Martin et al. 1999). These findings suggest things like calcium release and uptake and concentrations of inorganic phosphates in the muscle are partly responsible for fluctuations in strength throughout the day (Guette et al. 2005; Martin et al. 1999). Unfortunately, the precise mechanisms are still unknown.

The time-of-day effect on muscle strength has a few implications. First, one reason that researchers and clinicians measure muscle strength is to evaluate the effectiveness of therapeutic interventions. In such situations, patients are asked to perform tests of maximal strength before and after the intervention. Thus, whenever possible, patients should be re-tested at roughly the same time of day as their initial assessment. This will ensure that any change in muscle strength observed at re-assessment is due to a true physiological change from the intervention and not simply the time of day the patient was tested.

Second, researchers are now considering the possibility that muscle adaptations to exercise are influenced by the time of day that workouts are completed. This research, however, is still in its infancy. Results are currently inconclusive, and more adequately controlled studies are needed. Also, one must keep in mind that exercise at any time of day will usually result in improved health outcomes. Thus, any effect that time of day has on muscle adaptations to exercise is more about the magnitude of improvement, not the presence of an improvement.

Finally, for those who love jam or other condiments that come in tightly sealed jars, opening lids will probably be easiest in the afternoon or evening, when muscle strength is at its peak.

Dr. Jim Nuzzo (@JamesLNuzzo) is a Postdoctoral Fellow at Neuroscience Research Australia (NeuRA). He studies how strength training alters the neural connections between the brain and muscles. To read Jim’s other blogs, click here.