Training improves task performance due to improved motor control through practice. Intriguingly, training with one limb can improve task performance with the other, untrained limb. This phenomenon is known as interlimb transfer or cross education, and it is important for rehabilitation when the most affected limb cannot engage in training (Ruddy and Carson 2013). Ample evidence of this phenomenon exists. However, the phenomenon seems to be most prevalent in the early phase of skill learning (Boutin et al. 2012), and this may limit its clinical significance. 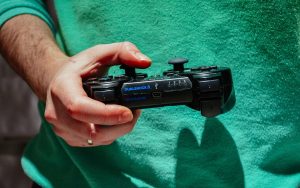 In our recent study (Christiansen et al. 2017), we investigated if progressive motor skill training was more effective than non-progressive training at inducing the interlimb transfer effect. Twenty-three healthy participants played a classic arcade game (“Breakout”) with their dominant, right hand for 6 weeks (3 training sessions per week, 30 minutes per session). Twelve of the participants performed progressive training, in which game difficulty was gradually increased throughout the 6 week period. The other 11 participants performed non-progressive training, in which game difficulty remained the same over the 6 weeks. Before and immediately after the 6 week period, we measured how well participants could play the game with their right and left hands. The left hand was considered the “untrained hand” because it was not involved in the training. Also, to identify changes in the central nervous system with skill learning, we used non-invasive brain stimulation (transcranial magnetic stimulation) to monitor changes in corticospinal excitability of the neural connections between the brain and the muscles of the untrained hand. Moreover, to assess retention of task performance and corticospinal excitability, we acquired measurements 8 days and 1 year after training was completed.

Our findings imply that skill improvement of the untrained hand is driven by changes in the central nervous system which take place when the participant is challenged with training that becomes progressively more difficult over a given training period. However, the accompanying behavioral benefits and neurophysiological effects disappear when training is discontinued. This underlines the importance of closely monitoring the proficiency and performance of patients in early neurorehabilitation and progressively adjusting the difficulty of their exercises.

Lasse Christiansen is a research fellow at the Miami Project to Cure Paralysis at the University of Miami. Lasse uses non-invasive brain stimulation to explore the mechanisms underlying changes in motor control. He also researches new neuromodulatory strategies to improve motor function in patients with spinal cord injury.

4 thoughts on “Training pays off…even for the untrained hand”